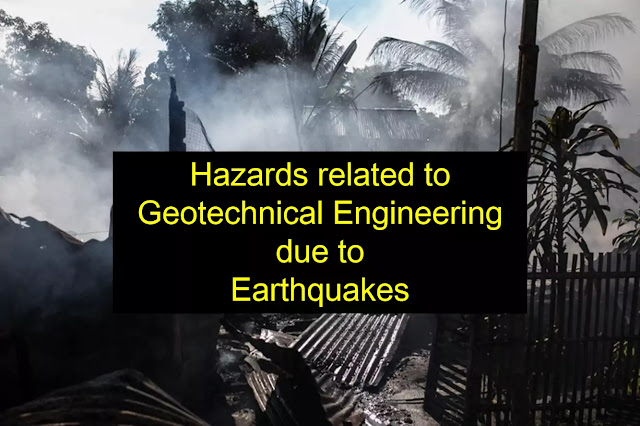 An earthquake is defined as the sudden shaking of the earth surface caused by a source of disturbance inside the earth. Earthquakes occur due to sudden mass shifting in bedrock occuring along faults by the forces within earth. Such earthquales are called tectonic earthquakes. Earthquakes cause one of the most destructive natural disasters leading to heavy losses of life and property.

Since, earthquakes are so far unpredictable and unpreventable, the only  course left to engineers is to design and construct and take remedial measures such that damages caused by earthquakes are minimum.

From engineering aspects various hazards related to geotechnical enginneering due to earthquake are as follows :

1. Liquefaction of soils : Liquefaction is the state of cohesioless soil when its shear strength reduces to zero due to pore water pressure caused by vibration during the earthquake. Due to liquefaction, soil may lead to many types of failures such as bearing capacity failures, tilting of buildings, land slides, floatation of undeground structures.
2. Ground Shaking : The intensity, duration and wave form of ground shaking due to eartquake depends on number of factors such as magnitude of earthquake, depth of focus, epicentral distance etc..
The ground shaking intensity at a location is usually specified in terms of Peak Ground Acceleration (PGA). The characteristics of ground shaking are required to predict the response of soils and foundations.
3. Surface Rupture : Surface Rupture depends on magnitude of earthquake. For earthquakes of smaller magnitudes, the rupture zone occurs deep inside the earth and does not extend to ground whereas for earthquakes of large magnitude about 6.0, the rupture zone extends to the ground surface. Surface Rupture creates numerous problems to structures such as buildings, highways, railways, bridges etc.. that are located directly above active fault. Therefore, it is advicable to not construct any structure above the active faults as they are susceptible to heavy damage.
4. Land Slides : Landslides are caused due to earthquakes. The failure of slopes occur due to tension cracks. These tension cracks may lead to the formation of water channels thereby causing softening and saturation of soils.
5. Lateral Spreading : Lateral Spreading is defined as the movement of soil layers in horizontal direction parallel to the ground slope. Lateral Spreading occuring under any structure causes heavy damages. Thus suitable provisions are made in the design of structures to withstand tensile stresses. Lateral Spreading in general are observed on gentle slopes.
6. Shear Failure of Foundations : When seismic loads acting on a structure are transmitted to the foundation through ground, the stresses acting on the soil increases. When these stresses exceeds the shear strength of soil, bearing capacity failure may occur.
7. Structure Settlements : Due to earthquake, soils undergo cyclic loadings, which may lead to large settlements. Differential settlements are common during earthquakes, which may lead to heavy damage to structures. Therefore, adequate provisions should be made to prevent structures from differential settlements in the design of structures.
8. Failure of retaining walls : During large earthquakes, retaining wall may collapse, thus the support provided to soil mass is removed. Therefore, it may result in heavy damage to adjacent structures.
Tags : earthquake, cause of earthquake, earthquake geotechnical engineering, effect of earthquake on soil, effect of earthquake on foundation, effect of earthquake on liquefaction, liquefaction, landslides, shear failure.
Share
Geotechnical Tags:cause of earthquake, earthquake, earthquake geotechnical engineering, effect of earthquake on foundation, effect of earthquake on liquefaction, effect of earthquake on soil, landslides, liquefaction, shear failure